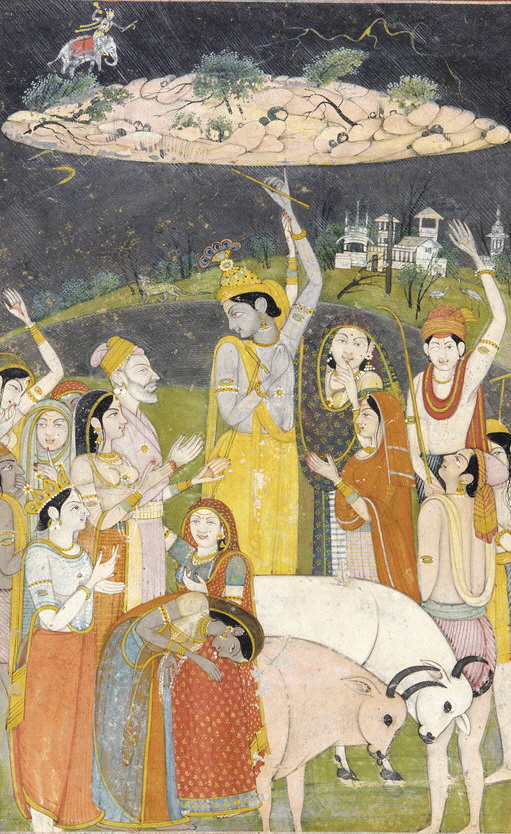 There are those certain holidays when you just want to be with your people. Depending on your upbringing, it might be Thanksgiving; Christmas; Yom Kippur; Diwali; for me, Govardhan Puja ranks high on that list. No matter where I am, on Govardhan Puja I make it a point to travel to be with my spiritual family. I have to admit a special bias towards this holiday. Its message of radical love has always meant a lot to me, and I was moved to write a little about it today.

The backstory is that after the harvest, the farmers of Vrindaban were preparing an annual ritual offering to Lord Indra, the divine being to whom they attribute the rains and, therefore, their ability to provide for their families and community. The child Krishna, with Whom none can argue, persuaded his father and the other farmers to make their offering to Govardhan, the mountain at the center of their community, rather than to a distant Indra. Govardhan, the very substance of their earth, more directly provided for their crops and their cows and their clean running water, Krishna argued. To make a long story short, Krishna persuaded the families to not just offer the typical portion of their harvest to Govardhan, but all of it. Every last seed, grain of rice, head of wheat. And not just a few farming families – but all of them. Clearly, this pastime has taken on not only earth-honoring, but also mystical dimensions. Enhancing the mysticism, Krishna took on giant form and ate all the offerings – and called for more. Feeling a little anxious, the farmers brought whatever else they could. More, he called. More!

What is this More? What does it mean when Krishna asks for everything we have – and then more? Krishna’s call may be the insatiable call of a child to be loved. To his village community, who saw him as their darling boy, it may certainly have been that. But what does it mean to us? God does ask us to give Him everything we have. Like that mountain, who directly provided all the food of the community, God has provided everything we have, too. Although we will ultimately return everything to God at the time of death, what does it mean to be asked to give Him everything, and more, in life? Sometimes, this takes place in dire suffering – loss and grief, disability, chronic illness, addiction. At other times, it takes place through more voluntary gifts and sacrifices of our possessions and our talents to God’s service. Some people answer a call to give their very life to God’s service.

And once we have given everything, and God asks for yet more, then what happens? Are we left broken and alone, with nothing?

The most radical aspect of Govardhan Lila is that when God takes everything, we are not abandoned. We are sustained. When giant-Krishna-as-Govardhan sucked up every last morsel of food and grain of rice – the food that would have sustained the community for the entire year – He did not leave them in this situation. He smiled. Maybe He burped. And He restored everything, just as it was, and more. Krishna’s radical love is that as the Sustainer of All Life, He provides what we lack and maintains everything we have. Everything we give – voluntarily or not – is restored. And the villagers weren’t alone; they were together, sharing in this miracle.

In the second part of this pastime, when the village is assaulted by a cyclone sent by the jealous Indra – I’ll spare the details – and the villagers take shelter under the Govardhan mountain miraculously lifted by Krishna – they are, again, not alone. They have already witnessed one miracle, seen everything taken and then restored. Now, as their entire village is being flooded by the kind of storm that washes away mountainsides, they are again taken care of. And not just basic taken care of, like sheltering-in-a-football-stadium-during-a-hurricane-kind of taken care of, but extra. Because our God is always extra. Underneath that mountain the community gathers around Krishna, warm and dry, experiencing yet another miracle on top of the miracles they already have. In almost all of Krishna’s pastimes, He is relating with an individual or small group of people; rarely with a broad swath of society. But during this storm, everyone is under that mountain. The young and the old, the gopis and the gopas, the educated and the uneducated, the priests and the farmers and the laborers, the cows and the donkeys and the dogs, the rich and the poor – they are all together. And they are experiencing, our scriptures say, not only their own personal relationship with Krishna – but the love He shares with all the others, too. They are each feeling Krishna’s love for all the others, and all the others’ love for Krishna.

What a special experience. This is why we hold Vrindaban as the highest example of devotion, as the spiritual world itself. We are made to be in relation, and Govardhan Puja celebrates the radical togetherness that’s possible when we are gathered together in love. But it also asks us a question. It asks us whether our communities reflect that inclusive spirit. Govardhan Puja reminds us that it’s not about who earns more, or who dresses better, or whose family looks more put together. Our communities need to include the elderly, the poor, the brokenhearted, the disabled, the mentally challenged, the marginalized and oppressed – because Krishna did. What more can we do to actively include our own gopas and gopis and casteless neighbors in our temples?