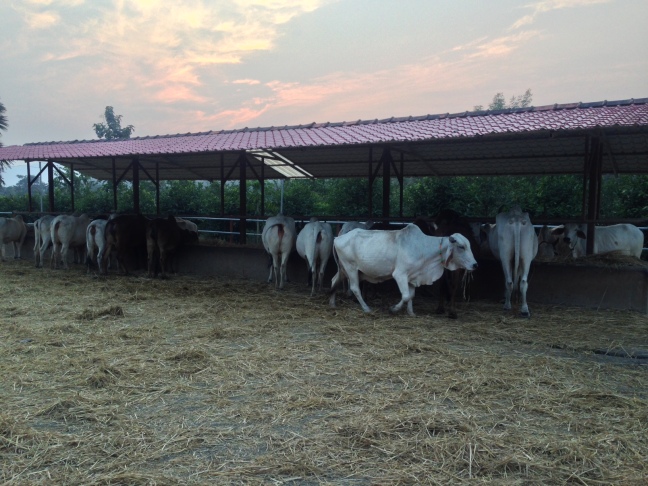 This post is part of a series, Snapshots of the Eco-Village

When I’m not working on my project, I’m most likely to be found in the goshala (cow barn). Situated on the Eastern side of the Eco-Village right up against Kohoj Mountain, the goshala has a beautiful view of the dry scrubby mountainside and lush irrigated hayfields beneath, a stark contrast of brown and green. The goshala is home to almost 100 cows, bulls, and oxen (whose numbers keep increasing – four were born in the last three weeks!) of heritage local breeds, Gir and Tharparkar. The purpose of the goshala is to establish a model for cow protection – and they are, quite literally, the happiest cows 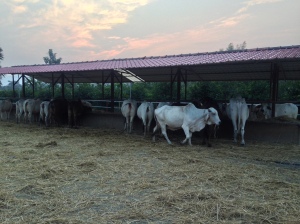 I’ve ever seen. Cows and heifers, and bulls and oxen, are separated in two sides of the enclosure, each with their own 1-acre outdoor play area and shaded feeding area. They go out for grazing in the daytime and are well taken care of, including high-quality fodder, brushing and bathing. Cows are never tied (except during milking) and no nose-halters or nose-rings are used.

In fact, the monks living at the Eco-Village are required to come brush or serve the cows for a minimum of two hours each week! This policy is representative of the Eco-Village’s attempt to instill a nature-loving, ‘Vrindavan’ spirit in all the residents as well as to build connections across different sectors of the community. (Monks work side by side with other staff in most sectors of the Eco-Village; some of the same monks who are leading the feeding and milking in the evening can be seen doing worship in the temple in the morning!) The monks first thought they were doing the cows and bulls a favor by brushing them, as the cows became much more peaceful and easy to handle – but in fact the monks also became a lot more peaceful! 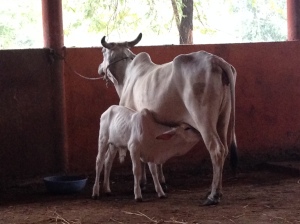 The goshala is not a large producer of milk. Only a handful of cows (those with young calves) give milk at any given time, and native Indian breeds only give 1-2 liters per milking (they are bred for labor and heat-tolerance), so the day’s total (anywhere between 8-16 liters) goes straight to the temple for offerings to the Deities. (Other milk used at the Eco-Village comes from local farmers who are committed to ahimsa dairy.) However, it gives many other valuable products. Every day, cowherds collect cow dung (Gobar) and urine (Gomutra) that are used for a wide variety of purposes in the Eco-Village. Cow dung is pressed into patties that are sun-dried and used in homas (fire sacrifices). It is also used in making compost and fertilizer for the organic farm; to make a soft and clean ‘floor’ in outdoor areas; and can be used in the biogas digester, which is not currently active. Cow urine is used in a variety of organic fertilizer and pest-deterrent formulas; as a cleaning agent; and in a variety of medicinal preparations. In traditional Indian practice, cow dung is considered the most valuable output of the cow – not milk – due to its essential role in farm fertility and value in many other uses. Hence, the ahimsa (slaughter-free) dairy equation works well in a diversified farm where cow dung, urine, and labor can be put to use. 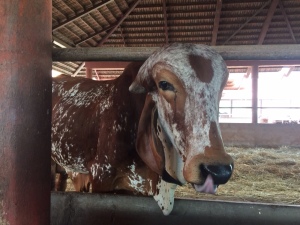 I come to the goshala most afternoons after winding down my day’s work and spend an hour or so helping with feeding, milking, brushing, collecting cow dung, or helping visitors interact with the cows safely and comfortably. I have developed a strong connection with some of the cows and a deep appreciation for all of them. The cows and their humble and dedicated caretakers are really inspiring. I can’t imagine that anyone could support non-ahimsa dairy after spending a few days or weeks volunteering in the goshala. Each cow has a unique personality that shines through from a very early age. The young calves are playful exactly like dogs and appreciate human affection, and will form bonds with caretakers. The cows have real relationships with one another and can often be seen licking their children or friends affectionately, leaning on one another like comfortable friends, or quarreling with their rivals. They are very peaceful and will walk around a person standing in the enclosure (even a stranger) rather than hurt them, although some cows will give you a big push! And they really reciprocate with affection – with being massaged or brushed or fed some fresh fruit or grass. Even a feisty cow will stand still while being brushed, and will nudge your hand if you stop brushing!